Gilgit-Baltistan of Pakistan has a unique and vital role in the sustainable development of Pakistan. Nature has endowed this area with high mountain ranges, massive glaciers, glorious rivers, and magnificent valleys. This article is all about climate change in Gilgit-Baltistan.

Northern Pakistan hosts three of the largest and most spectacular mountain ranges in the world, the Himalayas, the Karakorams, and the Hindukush.

With northern Pakistan, there are 5,218 glaciers and 2420 glacial lakes, 52 of which have been classified as potentially dangerous Glaciers in Pakistan recede at an average rate of nearly 40 to 60 meters per decade and pose a threat to the region and to the 1,3 billion people living in the basins of the nine river systems covered by the HKH glaciers.

The threat of climate change is almost impossible to overstate. Global warming will have catastrophic effects such as accelerating the rise of the sea level, droughts, floods, storms and heatwaves.

This will affect some of the poorest and most vulnerable people in the world, disrupting food production, and threatening vitally important species, habitats, and ecosystems.

The 62 kilometer Baltoro Glacier is one of the longest glaciers outside the Polar Regions. A project sponsored by the European Union and the United Nations Development Program (UNDP) has identified at least 52 glacial lakes in the Gilgit and Astore districts as potentially dangerous.

Climate Change in Gilgit-Baltistan and Floods in the area

Since June 2013, Gilgit-Baltistan has suffered extensive flooding, though this was caused not so much by heavy rainfall in the area as by high temperatures resulting in increased runoff from the melting glaciers.

Landslides are a common problem following severe weather events, as the excess pore water pressure can overcome soil and sediment cohesion, allowing them to flow like liquids. The area also suffered significant floods in 2010 and 2011, due to the melting of glaciers.

Retreating Himalayas in Gilgit Baltistan
Glacial retreat is a phenomenon that scientists normally attribute to global warming; it is caused by an increase in the concentration of greenhouse gases in the atmosphere due to human activities such as deforestation. Glacial retreat bodes ill for all of the region’s villagers whose livelihoods depend directly on their cultivation.

Human activities are the main cause of snow melting

Two nuclear-armed rivals Pakistan and India battle in Siachen, in the Gilgit-Baltistan mountain glaciers, at 5,653 meters above sea level. In addition to billions of dollars on each side on military extravaganzas at Siachen, the war has cost 5000 lives on both sides by now.

Since India and Pakistan are at war in Siachen, preliminary infrastructures such as ports, helipads, and pipelines have been developed to supply kerosene to their camps.

Climate Change in Gilgit-Baltistan and Deforestation

Climate Change in Gilgit-Baltistan and loss of capital

Over the past 20 years, 140 climate-change triggered events in Pakistan had resulted in an average of 500 deaths each year and a loss to the country’s economy of $200 million. 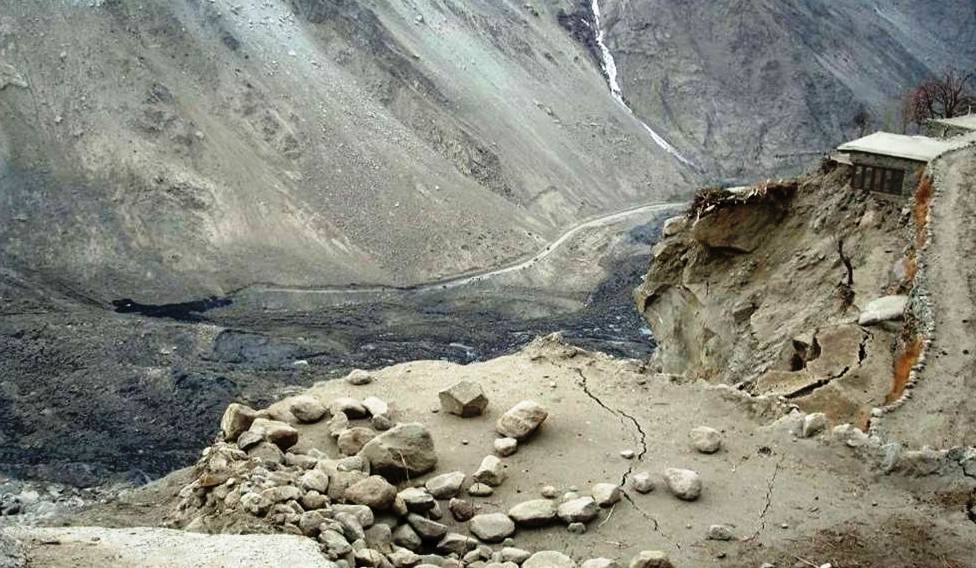 Studies have shown that glaciers feeding the Indus will disappear by 2035, and they are rapidly melting, and water conservation needs the hour for Pakistan to ensure sufficient water is available for future generations.

Pakistan needs to focus on agriculture, to improve the infrastructure for water storage and distribution. Over 20 years, the extreme weather calamities resulted in Pakistan losses worth 0.7 percent of the country’s Gross Domestic Product ( GDP). The Climate Risk Index for 1993-2010 for 2014 ranks Pakistan by climate-related events as the 12th most affected region.

Impact of Climate Change in Gilgit-Baltistan on livelihoods

Another significant effect on health issues from climate change is. Health is affected either by the direct impact of changes in temperature, droughts, or floods or indirectly due to climate-induced economic disruptions caused by factors such as crop failure, mudslides and associated malnutrition and famine. The spread of diseases like malaria, dengue, diarrhea, etc. will affect more health.

Gilgit-Baltistan communities can not respond to such massive destructive events, caused by climate change like floods and droughts.

In order to ensure the prosperity of agriculture and food security in the region, both India and Pakistan should decide to retreat from their glacial warzones and be more attentive to their preservation;

A new international climate agreement is the need of time.

Origin Of The Balti Peoples In Baltistan